Why war is necessary... 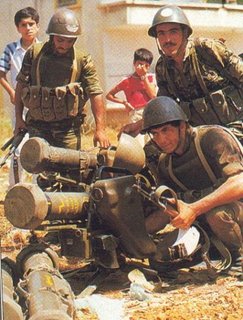 Two weeks ago, the UN and French government brokered a cease-fire between the Hezbollah and Israel. In the cease-fire proposal, they called for an unconditional release of the two abducted soldiers. On the outside, it seemed perfect and peaceful. But it is extremely flawed.

Here's why. If there's anything that Hezbollah wants, it's the trading of prisoners. They didn't go that far for nothing, and as long as their objectives are not achieved, there's no reason to turn over their trump card. So, eventually, nothing will be achieved by this short term cease fire. Moreover, it lets both sides have more time to prepare better troops, weapons, and strategies, to only cause more deaths on the battlefields and costs more innocent lives.

Israelis have their own sights in mind. To weed out the terrorist organization once and for all, is indeed better solution than keeping the ticking timebomb. Absorbing Hezbollah troops into the Lebanese Army is definitely not a long term approach. As long as the ideology is alive, it's a matter of time before all hell breaks loose again.

The peacekeepers are a joke. Look at them, people don't wanna fight them, and they have no motive to stabilize things the way they should be - by killing off the opposition.

And you're probably going like - What about the civillians in Tyre? Come on, if there are any people smart enough to stay in places like that, it's either they're held in by Hez troops or they're holding their fellow citizens from fleeing. It's not the first time things like this happened, and will not be the last.

In the world where conflict is inevitable, why do we try to stop wars at costs so great, it defeats the purpose of peace. I say - evict everyone from the region, and let them fight, finish it like a man. Then, the people can go back to their hometown and rebuild it. This time, it's permanent. It's a much better solution. Low civilian casualties and efficient.

As a conclusion, I'd like to point out that the world's first digital computer is made to read missile shells during World War II. It is easy to see how digital computer enhanced our lifestyle greatly and saved lives through computer aided surgery, pharmaceutical research, and so forth. Conflict is often the first step towards the better, all we need to do is look at the bigger picture.

Keep the troops in Iraq, clear out the vermin before it's too late. (and take some oil while u're at it)

The most advanced countries in the world are belligerent, U.S. Brits, Japan, Israel, China, Russia, which one of them have not fought a war in their own interests?

Anti-war sentiments are terrorist-loving in the context of our day. As a chinese saying goes: "kindness to the enemy is the cruelty to oneself", please, be kind to yourself, just for once.
All hail your glorious blogger the amazing JukeBox at 2:33 PM 4 comments:

We are much easier to program than computers, we do not require much complicated languages, and comprehends instruction MUCH easier.

Just like when we were young, and if we did something bad, we'll get spanked and punished. Some call it education, but it is also a very subtle programming, a foundation of do's and don't's, protocols (yes, we need to greet people before starting a meal).

And if you think it takes a long time to program a person, you may find it really wrong. A person can learn fast, and likewise brainwashed fast. If you haven't keep in touch with the news recently, there was a jet bombing threat that was thwarted (thank goodness). 10 jets flying from london to the U.S. were targeted for bombing, allowing it to drop into the atlantic ocean, however, at the final phase of the plan, perpetrators were caught. Quoting ITN reporter, Helen Callagher, "friends to one of the young men (arrested ppl) said they became very religous recently, attending a mosque setup in a converted house near the address...". How long do you think "recently" would be? 6 months? 1 year? nothing is too long, to make a person throw away their lives for some damned terrorist attack.

[ side note : I am not saying being religious is bad, but u know, I am an atheist after all. Saying that the young men which has connection to the terrorist attacks are very religious of course would throw people off guard and make it seems like religious people are of such violent nature is of course extremely incorrect. But in my context, I am just saying that, people could be programmed one way or another. ]

There are people that programs others, there are some that gets programmed, some that does both, (knowingly and unknowingly).

P.S. I am still trying to program myself so that i will wake up early in the morning, do stuff on time and such. not much of a success yet, but i'll keep trying.
All hail your glorious blogger the amazing JukeBox at 1:35 AM No comments: